Is Pex Pipe Expensive to Install? 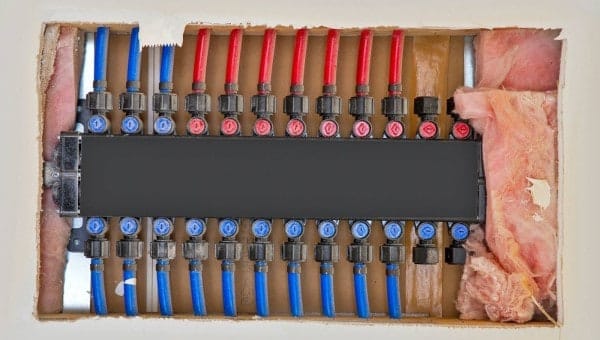 PEX or Copper – Which is better?

There are several advantages of PEX over copper, including:

Less expensive. PEX tubing of half-inch costs less than copper by about a third. Instead, you'll spend some of the amount saved to buy a special installation tool. But for a medium-to-large scale plumbing project, you'll end up saving more on a pex pipe replacement.

Quick-to-install fittings. If you have a 'home-run' and manifold system, it's as easy and quick as running a garden hose to every fixture. And even if you have a typical main line and branch system, it's still quicker to connect than soldering copper.

Corrosion. Unlike copper which can corrode upon contact with acidic water over time, a PEX supply will not. Acidic water has no effect on PEX supply, making it a great option for these areas.

PEX and CPVC similar in cost. Yet, PEX may still be a better option. Glue isn't needed with PEX, so you won't have to wear a respirator or worry about a well-ventilated workspace. Upon freezing, CPVC is more likely to burst than PEX. PEX is more flexible and obtainable in long lengths, hence, it can be more effective in remodeling when "fishing" through walls.

Yes. There are several ways of connecting PEX, but only two are practical for DIYers bases on affordability: cinch clamps and crimp rings.

Cinch clamps function more like the regular band clamps which you probably already know. You simply pass the cinch clamp tool through the protruding tab and tighten the cinch clamp by squeezing. This tool can be used for all cinch clamp sizes.

Cinch clamp tools can be gotten from about $40. We prefer the one-handed type since the ring can be held in place with one hand as you tighten it with the other hand. You'll only need a scissors-like cutter in addition for the tubing.

Crimp rings consist of a band of metal, typically copper, which you pass through the fittings and use a crimp ring tool to compress. The major disadvantage is that it requires either a universal tool with a swappable insert, or different crimping tools for three-quarter inch and one-half inch fittings. You can get a combo pack with interchangeable crimp jaws from about $100.

Out of several methods of splicing PEX fittings into an existing pipe, the easiest is actually cutting out a section of the pipe and slip through a stab-in tee. A common stab-in fitting brand is SharkBite. You can save time with this method as it doesn't need soldering.

However, if you intend to bury this connection in a ceiling or wall, then you should confirm from your plumbing inspector as some regions don't permit concealing of stab-in fittings.

Alternatively, you could solder in a PEX supply adapter and a tee. The PEX supply tubing should be slipped over the adapter and attached with your preferred connection method.

No. PEX supply fittings can be installed like other pipes – main lines and branches connected to each fixture. However, much of its benefits would be lost due to the high number of fittings.

In home-run system, a manifold is installed in the utility room or somewhere near the main water supply line and water heater unit, while a separate PEX tube is run to each fixture. Although more tubing is required here, it is quick and requires only two connections: at the fixture end and manifold respectively.

Does It Meet Code?

Before you begin your PEX plumbing project, consult your local inspector for exact local requirements as there is no unified federal plumbing code.

Must I Use Blue for Cold and Red for Hot?

The blue and red colors of PEX is meant to help you identify the cold and hot lines. However, you can make use of white PEX for everything if you want.

Pex Pipe Replacement: How Reliable Is It?

Usage of PEX dates back decades in other countries with thousands of homes using 30-year-old, no-leak PEX. Most issues with PEX systems in the United States and other countries were a result of faulty fittings or sloppy installation and not the tubing itself.

Can PEX Be Connected To Water Heater?

Not directly. You'll first need to extend a pipe 18 inches from the water heater, and then connect the PEX to the pipe.

Which Tubing Is To Be Used For Internal Water Lines?

There are three grades of PEX supply that can be used for water lines. These are PEX-A, PEX-B, and PEX-C. Though manufactured differently, PEX-A is a bit more flexible.

You can spend a tiny bit more ordering online, so no need to go looking for it around town because the difference isn't so much. Feedback we got from some plumbers indicated that any of the types were suitable for use in the home.

Several methods exist for this. For a visible connection, such as underneath a wall-mounted sink, you can make use of a copper stub-out if you won't mind the copper tubing protruding from the wall.

You can connect a shutoff valve (compression type) to the one-half inch of copper stub-out, and then connect the fixture. For concealed areas, such as underneath the vanity cabinet or kitchen sink, you can run a PEX supply to the shutoff valve directly to remove a joint.

Pex Pipe Replacement: What About Expansion?

Expansion and contraction is more in PEX supply than copper, so don't make it tight. Loosen it a bit between fasteners. For long runs, you can set up a loop to permit contraction. With the loop, you can also steal a little extra tubing just in case you mess up.

Expansion and contraction causes PEX to move, so you should ensure to drill oversized holes through joists and studs for easy sliding. Also, ensure to use plastic straps rather than metal straps.

Will PEX Split or Break When Frozen?

Maybe not. Manufacturers aren't willing to admit it, but field reports indicates that PEX can endure freezing. However, you still have to protect the tubing from this. But the expansion and contraction makes it less likely to break compared with firm piping.

Can I Disconnect It If I Slip-up?

Certainly. You can cut off crimp rings using a special tool, and cinch clamps can be removed with side cutters. Yet, you can best cut either connector type using a rotary tool (a brand such as Dremel).

After removing the cinch clamp or crimp ring and pulling the PEX supply from the fitting, you'll need to cut off the tubing end in order to get a fresh part for the new connection.

If by any chance the fitting is damaged by the rotary tool, then you should have it replaced to avoid any leaks.